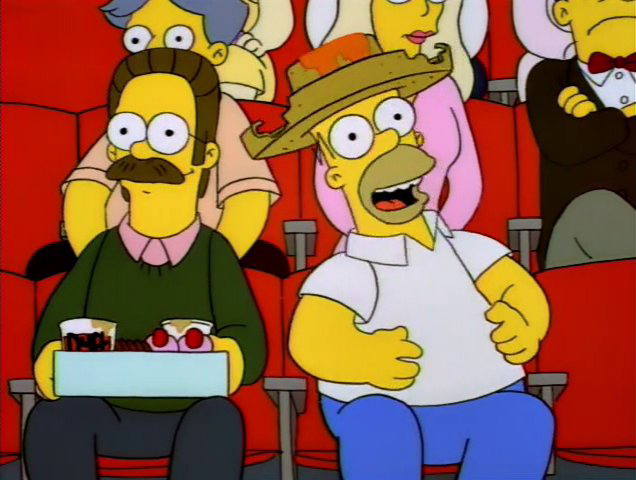 In honor of launching this new blog, I decided to go big. I’m talking NACHO HAT big. Because doesn’t everyone deserve to be a Nacho Man?

It’s time for the Pigskin Classic in season five’s “Homer Loves Flanders.” The Shelbyville Sharks are playing the Springfield Atoms and Homer simply must go. Bart sells him two tickets that turn out to be wig coupons, and this leads Homer to fantasize about wearing a Marge wig. He tells himself “I love you” in the mirror, chuckles, and decides “I don’t need her at all anymore.” It’s bizarre and hilarious. Flanders wins tickets to the game and offers one to Homer, who refuses at first but relents after eating a ceiling waffle (“Mmm…sacrelicious”).

Arriving at the game, Homer makes Flanders (who is driving) duck so that his friends won’t see them together. Lenny and Carl observe that Homer has one of those robot cars, and when they crash, one of those American robot cars. Flanders then buys all of the snacks and Homer is overjoyed when he spies, you guessed it, a nacho hat.

He sings Nacho, nacho man. I want to be, a nacho man! and has a grand time even though he gets hit by a keg. Ned secures him the game ball (Stitchface), and Homer is now happy to be Ned’s friend. Soon, Homer’s hanging out at Ned’s and breaking his brand new pool table. He starts to get on Ned’s nerves as he shows up whenever he likes, eats his family’s dinner, and tags along with to Ned’s weekly charity work at the soup kitchen, getting all of the credit.

Ned is already worn thin when Homer insists the two families take a weekend trip together. Bart gives Rod and Todd sugar for the first time, the Simpsons start a one-sided food fight, and Homer wrecks Ned’s boat. Soon after, Ned realizes he hates Homer. When Homer seeps through the bushes to hang out the next day, Ned lies and tells Homer he’s busy, sending him back through the bushes and making one of the best memes of all time.

After Homer goes Terminator chasing the Flanders’ car, Ned gets pulled over by the police and the church bus sees him in the middle of a sobriety test. He arrives at church amidst a swirl of controversy (the sermon is titled “What Ned Did”), and Homer’s loud breathing during silent prayer sets him off. The congregation turns against Ned, celebrating Homer’s recent charity work, but Homer comes to his defense and everyone apologizes. Ned thanks Homer and calls him a true friend.

NACHO HAT TIME! This was a doozy. I first had to come up with a hat-shaped setup that was heatproof (as seen below). Then I had to decide what to make the hat out of, how to cook it, etc. I started by attempting to make it a corn chip hat using masa dough. It baked up crisp but couldn’t hold the shape well enough to be a wearable hat. Ideally a nacho hat would be made with a big mold and then fried, but I don’t know anyone with a fryer that big. I settled on flour tortilla dough, and basically made a giant, hat-shaped tortilla. And it worked! I even put it on my head and ate nacho cheese out of it. Life is good.

The instructions are long, but it won’t actually take you that long to make. I share my hat shaping set-up, but get creative if you don’t have all of these pans. Just make sure it’ll fit on your head and everything is oven-safe. It’s a fun centerpiece at a party or to wear around town to formal occasions. Just make sure you sing Nacho Man while wearing it.

One Reply to “Nacho Hat”