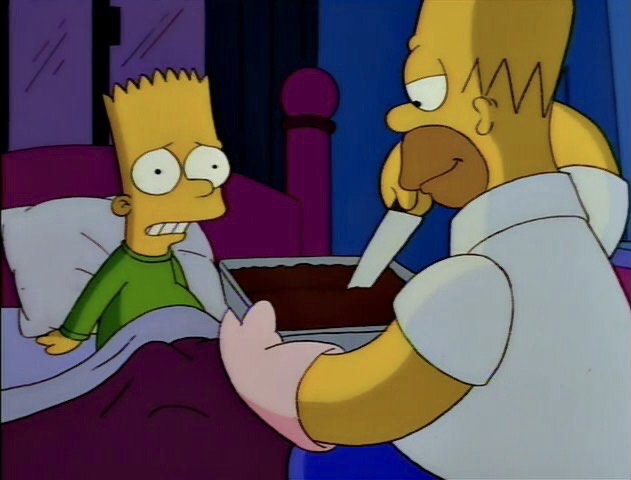 It’s time for a classic, top-notch Sideshow Bob episode. Bob is sending bloody, threatening letters to Bart from prison, scaring the living hell out of him and giving new meaning to the surfer tune “Wipe Out.” He’s released on parole even though he’s sporting a big DIE BART, DIE chest tattoo and an OUCH, MAN back tattoo.

The police rig up the house and a hired man begs Bob to leave, but he persists. The family (now The Thompsons) moves to Terror Lake with Bob attached to the undercarriage. Bart is too scared to sleep, and Homer isn’t helping. He runs in the room and yells “BART, YOU WANT SOME BROWNIE BEFORE YOU GO TO BED?!” with a butcher knife and a pan of hot brownies. He follows that up by running in wearing a hockey mask and brandishing a chainsaw. Real chill.

Sideshow Bob takes off with the houseboat and Bart, ready to finally murder him. Bart stalls by asking him to sing the entire score of the H.M.S. Pinafore, and Bob delivers in spectacular fashion. He’s distracted long enough for them to come upon the police at a brothel and they bake him away, toys.

Brownies! Scary ones! Cut them with a giant butcher knife and serve piping hot to your terrified child. This is a variation on my Big Pile of Brownies recipe in The Unofficial Simpsons Cookbook. It comes out August 3rd and you can preordered it noooow!