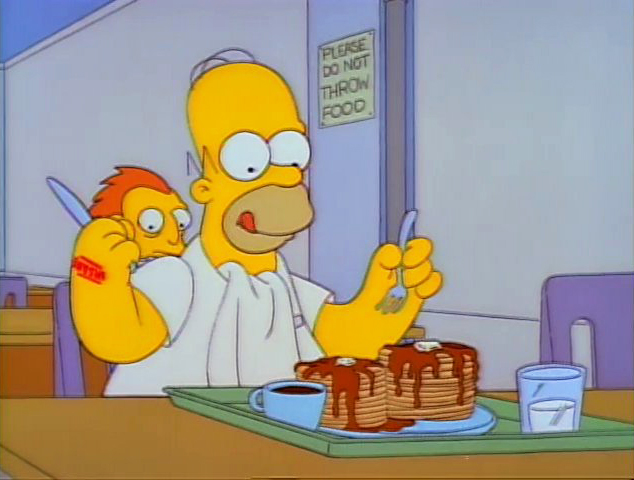 Feeling like you’re going a bit stir crazy? Don’t mind if I do! This go-around’s recipe is a good pantry staple breakfast that will make your mornings more fun and Simpson-y. It also comes from a classic episode that’s hard to find these days.

While “Stark Raving Dad” has some great jokes and music, it also features Michael Jackson. After a certain documentary was released on HBO, the show creators pulled the episode from streaming and syndication. Currently, the only legal way to watch it is on DVD. It is, in fact, the only episode not currently streaming on Disney+. Wild.

Hopefully you own The Simpsons on DVD, but if not, this is what you’re missing. Lisa pleads with Bart for a good birthday present, giving him a couple of days notice for good measure. Bart is supposed to be watching Maggie but he gets distracted calling the Krusty hotline and Maggie ends up swinging from the ceiling fan. Marge pulls out the clean laundry to find all of Homer’s white shirts dyed pink from Bart’s lucky red hat (“I’m not popular enough to be different!”).

Homer gets singled out at work immediately for his bright pink shirt and is taken for questioning by the management. Marvin Monroe provides a personality test and Homer gets Bart to fill it out. His answers get him carted away to the insane asylum and his roommate is a big guy who says he’s Michael Jackson (voiced my Michael Jackson, aka John Jay Lennon). Homer has no idea who that is and they become friends.

Meanwhile, Lisa continues to hint that she wants something special from Bart for her birthday to no avail. The big day rolls around and Lisa sits alone at the kitchen table singing happy birthday to herself.

Marge arrives at the mental hospital and clears everything up just as Homer is digging into a giant stack of pancakes. They declare Homer “not insane” and give him a certificate so he has it in writing. Michael offers to come visit right away since he’s admitted voluntarily, and Homer calls Bart and tells him that they’re bringing Michael and swears him to secrecy. Bart immediately calls Milhouse who tells everyone in town.

Everyone in Springfield shows up at the Simpsons’ house. Apu even closes the Kwik-E-Mart for the first time ever. As soon as Michael steps out of the car, they all know it’s not really Michael Jackson and they’re angry at Bart. Plus, Lisa is heartbroken that her brother didn’t do anything for her birthday.

Michael offers to help Bart write a song for Lisa. After Bart writing a real gem that’s totally unusable (“Lisa, her teeth are big and green! Lisa, she smells like gasoline. Lisa, da-da-da disa, she is my sist-a, her birthday, I missed-a!”), they stay up late writing a real song. It’s great and she loves it. After the song, Michael drops the voice and reveals himself to be Leon Kompowski. He walks off into the sunset.

I cannot help but love this episode even with the controversy. Not because of MJ; because of the top-notch jokes and real heart. Speaking of controversy, there’s lots of weird behind-the-scenes for this one. Michael Jackson himself called the show, told them he was a big Bart fan (yikes), and said he wanted to be on The Simpsons. He voiced the character under a pseudonym and had an impersonator (Kipp Lennon) do the singing. Probably (there’s some debate about that).

If you’re looking for a super quick and easy pancake recipe that’s not controversial, head right over here. This episode’s recipe is for a baking mix, meaning you can mix up a whole bunch and stash it in your fridge for whenever you’re craving a hearty breakfast. They’re whole grain (to make your brain strong) but still fluffy. Make a whole bunch and pile them up on a tray while declaring yourself not insane.